以覺知之名 In the Name of Awareness 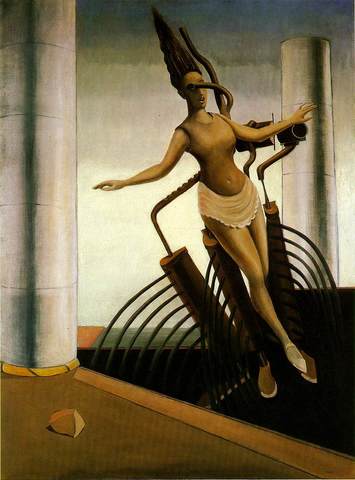 (The wavering woman, by Max Ernst)

以覺知之名 In the Name of Awareness

In the Name of Awareness

We have the ability to see through a human’s error and vulnerability, and can point out the emptiness of his tricks and behaviors; it is hard to pull him out from the gap of time because of the craze, an involuntary praise to himself was embedded, just like the deep-rooted instincts, or the long lasted prejudice, they are poignantly passionate with their own existence, hiding the hypocritical elegance in the pride and self-approbating as a merit. Narcissistic person often think all the living things are devoted to him (her), this kind of outlaw terror either in deep or surface life is difficult to be detected, and the person who has indulged himself (herself) endlessly in this way and his (her) gesture in triumph is just like coming out from the pit, yet the people in failure should contrarily pay for the purity that won’t be blemished.

Those who boldly praised themselves frequently and sang on the stage the insignificant victory once and again, they often too much self- esteemed their superiority and could not stop their unconscious self-proclaim as the world center, reason or terminus from their acts, they turned a small flesh and consciousness into a planet through an instinct reflection and arrogance, but never lived to see clearly their own significance or insignificance, and when the slept naivety in such person was awakened , the world would gain more evils. These jesters wrapped their fragile and poor dignities by barbed wires instantly through the honor and vanity and gasped in the sunset. Human’s pain usually comes from the keen insights, if people can’t be the enemy of himself,  he is only a dead body – that is a mediocrity and a fall!

Vulgarity is vital of certain people. It drives people to accept anything in the world; it tolerated the pain of life on the one hand, and being controlled by the cropped desire on the other. The vulgar have the hearts in wax that can be casted on any objects or various co-existences, his compassion is full of suspects rather than love, it is the sequela of suspected sympathy and arrogance of knowledge for which were sink into a frenzy while in decision and choice; the soul of vulgarity was through a self-recognition, then became fatigue, withered, and have the universe yawned finally.

There is people who lived in the conflict of love and hate, intimacy and alienation,   understanding and barrier , he has experienced the desire of snow, ice and flame, is enough to know hate and destruction, and he therefore felt he is great and suffice ; his spirits experienced the contradiction, the soul experienced the lies, and the body the confusion, revealing the existence of absurdity is an endless challenge, this kind of people never found his own existence in life or ideas but intoxicated in the self-indulged freedom, the shape of his fate is much less random as a wavering star.

Some people subsisted by showing trust and hope - in fact, they are lying and lied to themselves, these people pursued their living, hid the devil in subtlety, praised themselves “excellent” continuously under a self-approbated aura, and in order to cover up their pain, they instead relied on some elegant objects which were a little bit outdated and hypocritical, and the method as an object they used to hide the secret pain is accustomed to develop themselves a hobby of effectiveness by words.

What a person should lose then become courageous to crash all the conventional rules? Should the Greek philosopher Diogenes Laerce (200-250) have lost something then became unscrupulous. As the god of knowledge, he was either unrestrained or pure, he turned his deep thoughts into actions by an untamed, supernatural way; no one is more honest than he, and he is also an example of being a real man among us, of course, if human’s desire and behavior were not hindered by education and hypocrisy, the temperament of cynics as well as the dignity couldn’t be learnt in schools. The one who ever against Alexander and Plato was masturbated in front of the crowd, human is the sole object that he considered and disdained. Plato called him " the mad Socrates," but perhaps he should have been called " the more sincere Socrates," a person like Socrates who gave up benevolence , rhetoric and abandoned the city , that’s because Socrates, even if he was supremely noble, he was still disciplinarily confined, or to be a mentor, a role model only. However, Diogenes, had nothing to teach people but the cynical nature of thinking, his attitude was rooted in "nausea", that is also disgusting “ the ridicule of being a human”.

A thinker without illusion and thought about human’s reality, if he intends to stay in the world or to get rid of the mysticism, he might have to face a kind of wisdom, joke, or bitterness only, if he chose the public field as his lonely domain, he would constantly ridicule his own kind, or spread his nausea, and due to the nausea had experienced the Christian and the police office, so it had not been allowed. The two thousand years vows and regulations had diluted some spitefulness, besides, in such a rush world, who will stop to respond this defiance and taste the howl?

To know human profoundly is the dog, which is sufficient to prove that no one has the courage to accept his true image, and people are always rejecting the truth. Diogenes removed all his arms and gesture, wondering what kind a devil he is in others’ eyes ? ! In order to obtain a respectable position in various fields, you must be an actor, complying with the game rule, then feeling excited with a series of false issues. Man pursues perfection is much energy-saving than to completely explore himself (or herself),

He was fortunately born before the cross was set up, and heaven knows his attachment on the transcendence that the lure of new birth will not seduce him become an ordinary practitioner in the later known as a Saint. He is the only man willing to let us see the real ugliness of the people, and the advantages of the cynical had been trampled and overshadowed beyond recognition by a religion that hate the fact. Whether it’s the right time to get the “heaven’s dog” to confront with the truth?